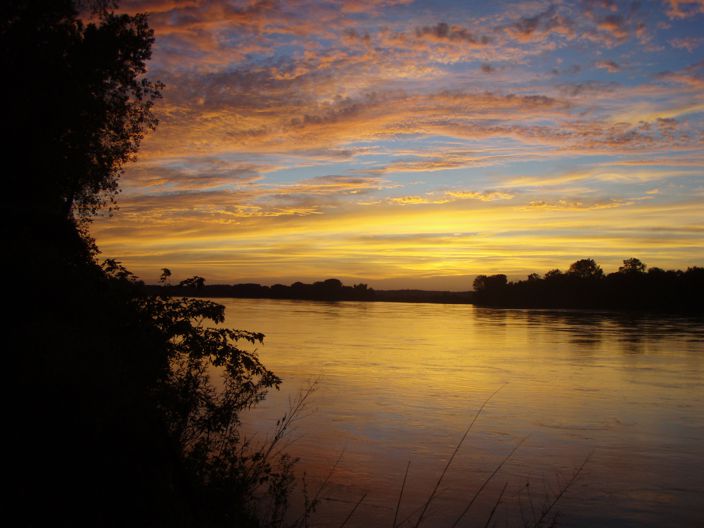 Sunset on the Missouri River

Never look back unless you are planning to go that way. – Henry David Thoreau

“Why the fuck would you want to do that?!”

That was the very candid response I most often received from my well meaning friends and family. I first broached the idea of paddling the MR340 back in 2009. The “340” is a nonstop paddling race on the Missouri River as it extends 340 miles across the state of Missouri from Kansas City to St. Charles (my home town), before finally merging with the Mississippi River north of St. Louis. Ferrying themselves and their gear in kayaks, canoes, dragon boats, and surf skis (occasionally sadists can be seen using stand up paddle boards), participants race to reach the take out on the St. Charles riverfront in less than 88 hours. The race is always held on a week of the full moon because most racers opt to paddle nonstop and overnight to ensure good finish times.

I had become aware of the race through a few friends in the Missouri Whitewater Association who had been competing since it’s inception in 2003. It’s been long enough ago that I don’t actually remember when the thought that “I” might race first trickled into my mind, but it didn’t take long for the idea to flood my imagination.

I eagerly read everything I could find on the race. Online forums were filled with experienced paddlers preaching to the wannabe’s that they had better be prepared for the physical and mental hurdles experienced in long distance endurance paddling. Many would note that hallucinations are not uncommon after the first 24 hours. Or that constant exposure of hands and posteriors to water can, well, result in maladies with such colorful names as “hamburger hands” and “crotch rot”. Adding to the fun, the veteran’s pointed out that in your ever increasingly exhausted condition you would be negotiating 340 miles of wing dikes, bridge abutments, barges, channel buoys (apparently these sometimes rise up ominously from the river depths entangled in downed trees and their branches), along with the ever present undercurrents found on a large river. After sunset, it’s the same but with everything cloaked in darkness and obscured by river fog. Don’t bother trying use a headlamp when paddling at night they warned…it’s as effective as using your car’s bright headlights in a snow storm. And to top it all off, be ready to encounter your greatest challenge – yourself. In this race it would be you and your thoughts and the river for 340 miles.

And I could not resist.

“But seriously, why would you want to do that?”

When I asked others their thoughts on attempting the race, most mistook my inquiry as an invitation to chat about whether or not they thought I should do it. I’m not sure I ever replied. And some probably interpreted my lack of an answer as evidence that I hadn’t thought it through. But I was simply surprised by the question. I mean, of course I was going to sign up for the race! I just wanted to know if they thought I “could” do it. And by do it, I meant, not die in the attempt. Offsetting my years of whitewater paddling experience was an equally impressive overindulgence in food and drink coupled with a generally low opinion of exercise for the sake of exercise. I was craving a life-affirming adventure; not an untimely demise beneath the murky muddiness of Missouri river water.

But by the time I started querying others, I was clearly long past the point of “wanting” to do it. In a very emotional and visceral way that I didn’t fully understand, I just knew that I “needed” to do it. Why? Well, I suppose I could blame it on growing up a short 100 miles south of Samuel Clemen’s (aka Mark Twain) youthful home in Hannibal, MO and the setting for Tom Sawyer. Fact is, to the dismay of my parents, I spent several springs and summers secretly cobbling together rafts and gear to float down a local creek whenever it would swell its banks from the flooded Mississippi and Missouri rivers. Yes, I grew up fancying myself a modern Tom Sawyer (whatever that meant to 13 year old me…and yes, I also listened to Rush…a lot…maybe only that one song…but a lot).

And I suppose I could also blame the influence of living in St. Charles County, Missouri and its historical significance as the departure point for Lewis and Clark’s grand adventure a mere 32 years before Samuel Clemens was born (and 72 years before he would introduce the world to Tom, Becky, and Huck). Many hours had been spent reading and day dreaming about their trip as well as those of other frontiersmen. Hell, I named my dog Boone…cause, well Daniel Boone…who happened to have spent many of his later years living just a short drive down the road from my current home.

[callout]But the unvarnished truth is that I grew up living vicariously through others (real and imagined) and I had spent more of my adult life dreaming of great and romantic adventures than I had spent actually living them.[/callout]

I needed more from life than to spend my days responsibly earning 9 to 5 dollars only to frivolously spend them between 5 and 9.  I had wasted years in deluded attempts to conspicuously consume my way through many restless nights and weekends. I needed an escapade that my 13-year old self would be proud of.

And so it was that on the morning of January 1st, 2010, I got up from my computer keyboard, walked into the kitchen and announced simply and without explanation, “I did it.” The reply was immediate.

“You didn’t?” my wife Sue asked hopefully. We’d discussed the idea before and she knew the race signup had opened the previous  midnight. Before I could reply she added, “Why?”

All I could muster in defense was, “Why not?! And besides I’ve already paid.”

“Alright then,” she paused before adding, “I guess that’s done. How can I help?!”

There’s a reason I married that gal.

And as easily as that, with support from her and many others, I launched an eight month period of weekly interval training, dieting, long weekend paddle runs in temperatures ranging from below freezing to a heat stroke inducing 111 degrees F. I spent multiple weekends traveling around the midwest to locate the “perfect boat”. A family vacation was scheduled around time with a lake house so training wasn’t interrupted. Trips to the in-law’s family farm now required loading a boat so I could train on a nearby stream. I’d paddle against the current until I ran out of energy and then drift back exhausted but satisfied to my put in.

And friends were made. So many friends. So many people joined together by nothing more than the simple bonds that link those who pursue a shared goal. That’s the thing about escapades; they inevitably help you find your tribe. Your people.

But that undertaking was almost 8 years ago! And it seems that I didn’t learn my lessons very well.

The past is prologue

Sometimes in life, your situation will keep repeating itself until you learn your lesson.

If you don’t like how things are, change! You’re not a tree! – Brigitte Nicole

I swear I must be one of the slowest persons in the world at accepting what I already know to be true! Once again I’ve allowed myself to get wrapped up in the day-to-day and I’m out-of-shape and restless. I need a new adventure!

But I won’t be paddling the MR340 again. At least, not right now.

I am seeking to upend and transform my life, to break out of my comfort zone, and to once again link up with a tribe of like-minded individuals.

I am looking for my next EPIC ESCAPADE.

And I think I’ve found it!